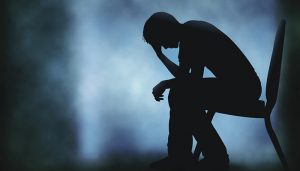 After i published my first two novels, I wanted to start work on my third novel and the title on my mind was PRECARIOUS FATE. I felt the urge to write about people that exhibited different emotional ills like bitterness, anger, loneliness, sadness, sorrow, rage, discouragement, frustration, suicidal, helplessness, hopelessness, worthlessness and so on. As I webbed my story on, I suddenly found out that the underlining suffering for all of these negative emotions is called DEPRESSION. Suddenly, it dawned on me that l’ve been a victim of depression myself because I’ve always felt unfulfilled, lonely and withdrawn, self-pity and bitter. There were times when I felt like committing suicidal but thank God i never acted on those thoughts. After i discovered what depression is, I swore in my heart that I was going to expose that deadly emotional disease.

What is Depression?
Depression is the world’s most common psychological problem – it is a medical illness that negatively affects how you feel, the way you act and the way you think. Depression impacts the lives of literally millions of people, every day. It takes the joy, peace and hope out of so many lives. . Depression is often said to be caused by changes in the levels of neurochemicals (serotonin and norepinephrine and dopamine) in the brain.
Depression causes feelings of sadness, loss of interest or pleasure, feelings of guilt or low self-worth, disturbed sleep or appetite, low energy, and poor concentration .These problems can become chronic or recurrent and lead to substantial impairments in an individual’s ability to take care of his or her everyday responsibilities.

Facts about Depression
• Globally, more than 300 million people of all ages suffer from depression
• Depression is the leading cause of disability worldwide, and is a major contributor to the overall global burden of disease
• More women are affected by depression than men
• At its worst, depression can lead to suicide. Close to 800 000 people die due to suicide every year
Source: World Health Organization

DO YOU KNOW SOMEONE WHO MAY BE CONSIDERING SUICIDE?